A Vegan Guide to Halifax

Some businesses have had changes due to Covid-19. I can't possibly update everyone properly though I will try to do my best.

I thought I'd make this guide for anyone who is moving or traveling here, just turning vegan here or even currently living here, and not knowing what it has to offer. Since I have a lot of time to kill, I tend to obsessively look up the vegan community: restaurants, health food stores, grocery stores and more. I like to see the transitioning of our community, see the broadening horizons for vegans and how much the world really is embracing compassion. I am going to break things down into categories and hope this is helpful to someone.

Pizzeria's: (many other pizzerias can make vegan pizza simply by removing cheese. Always inquire first though because some dough contains milk or eggs. I am only including the places that specify vegan or offer vegan cheeses)

A Taste of Asia:
Mexican:
Middle Eastern:
Vegan-Friendly Restaurants:
Dessert:
All and all I think Halifax is a very vegan-friendly city and it's ever expanding. I hope this can help someone. I want people to see that going vegan isn't scary and you don't have to feel like you are going to be left out. There's lots to choose from!

Wondering what you can eat outside of the city? Click here. Also check my Shopping Cruelty-free in Canada guide. The HRM has all of the stores mentioned in that post. And also check out my Chain Restaurant blog post.

If you have a business that you think should be added? Please email us here
Posted by LadyAshley at 17:41 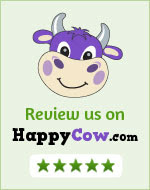